World Languages and Cultures School of Humanities and Social Sciences
Menu
The event had a huge turnout (probably 60-70 students attended). The reading was also accompanied by  the Chinese Guqin master John Thompson/唐世璋.
Zang Di, who has been honored three times as one of China’s top ten poets, is a featured poet at the Princeton Poetry Festival on October 5-6, 2017. His first English collection, The Roots of Wisdom,translated by award-winning translator Eleanor Goodman, was recently published by Zephyr Press. 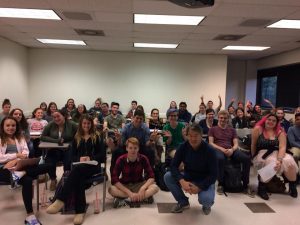 Zang Di 臧棣, a poet, critic, translator, and editor, was born in Beijing in 1964. He was educated at Peking University, where he received his Ph.D. in literature in 1997 and where he now teaches. Widely acknowledged as one of the leading poets and literary critics of his generation, he has won numerous honors and awards, including the Contemporary China’s Top Ten Prominent Young Poets Award (2005), China’s Top Ten Rising Poetry Critics Award (2007), the Chinese Poetry Biennial Top Ten Poets Award (2008), and the Poet of the Year Award (2008). Zang has published many collections of poetry, including The Universe Is Flat (2008) and No-Name Lake (2010), and edited several major anthologies of modern and contemporary Chinese poetry, as well as a collection of Chinese translations of Rilke’s poetry. He is the editor of the journal New Poetry Criticism
← Wu Hongfei’s Event
Student Ambassadors Program, Study in Spain →
Top